Vicente del Bosque Wants Puyol To Play On For Spain 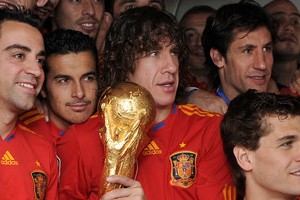 Spain coach Vicente del Bosque has admitted that he will attempt to talk Barcelona captain Carles Puyol out of international retirement.

Puyol declared before Sunday’s World Cup triumph that he would be stepping down from his Spain commitments.

However Del Bosque declared that : “He is an example for all players, the coaching staff …

“I will try to convince him to keep playing with the Spanish team.”