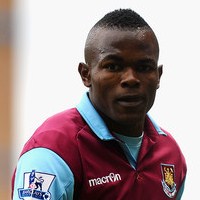 Lokomotiv confirmed yesterday they had signed Obinna to a four-year contract.

The former Chievo sce will now move to Russia on a free transfer.