It has been revealed that Victor Valdes is in negotiations over a contract release with Manchester United. 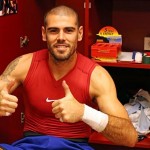 It was claimed the former Barcelona goalkeeper was happy to sit out his contract at United until the right offer arrived.

However, agent Gines Carvajal says talks are now underway about a release from Valdes’ deal.

“We are meeting with Manchester United to free Victor. He wants to stay in the Premier League because he has adapted there 100%,” Carvajal join Sport.