It has been reported that Barcelona goalkeeper Victor Valdes has been ruled out until the new year after picking up a calf muscle injury during Spain’s 1-0 loss to South Africa. 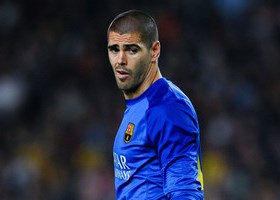 It is another blow for Barcelona, who have a number of injury problems, and for the 31 year old who plans to leave the club when his contract runs out at the end of the season.

Barcelona sports director Andoni Zubizarreta told Radio Marca : “Injuries never come at a good time and it is unusual for a keeper to get a leg injury but this is the situation and we will have to deal with it,”.