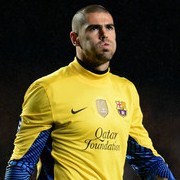 Victor Valdes insists that Barcelona will be focused for their Copa del Rey final clash with Athletic Bilbao.

Barca were poor for their final Liga game of the season against Real Betis, scraping a 2-2 draw.

“We hope to win the Cup. This season two important titles have slipped away, but we’ll be back as strong as ever next year,” Valdes said. Cesc Fabregas Has No Regrets Turning Down Manchester United