According to reports from the Daily Mail, Victor Valdes finally looks set to end his horror stay at Manchester United by joining Belgian side Standard Liege on loan. 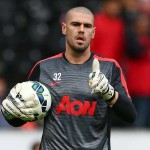 Valdes has endured a terrible time at United after his public fallout with manager Louis van Gaal and it was widely expected that the goalkeeper would be leaving during the January transfer window.

Now according to reports, the former Barcelona star is finally set to finaliae his exit from Old Trafford with Pro League side Standard hoping to secure on a loan deal for the remainder of the campaign.