It has been revealed that Real Madrid star Cristiano Ronaldo has stormed out of an interview with CNN. 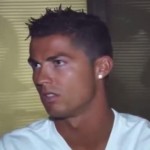 Ronaldo sat down with CNN to discuss football, but was pushed to comment on the FIFA scandal.

Marca reports Ronaldo was asked about the scandals affecting FIFA, with accusations of bribery and corruption at the highest level.

However, the question annoyed the Portuguese, who swore, then left.