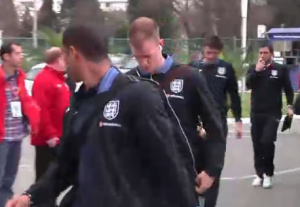 England may well have thrashed San Marino 8-0 on Friday evening, but their qualifier against Montenegro promises to be an entirely different proposition.

Glen Johnson looked more than a little sleepy upon arriving in Podgorica, but Roy Hogson’s men know the importance of staying fully alert and focused, in an atmosphere of renowned hostility.

In an intriguing sub-plot, Wayne Rooney returns to the ground where he was sent off against Montenegro in a Euro 2012 qualifier, which resulted in him missing the first two games of the tournament.

Montenegro will go into the game spurred by an eight-match unbeaten streak, including a 1-0 victory in Moldova on Friday to ensured they remain two points clear of England with 13 points.

Ukraine and Poland are both eight points behind Montenegro, and six points behind England in the battle to board a plane for Brazil next summer.

Skipper Steven Gerrard looked relaxed ahead of Tuesday’s match, which promises to be a fascinating encounter.