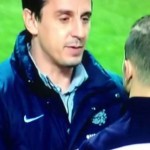 Jack Wilshere found that out before England’s match against Scotland at Parkhead.

The Arsenal midfielder was, in true modern footballer style, listening to some tunes on his headphones as he warmed up in front of a boisterous Glasgow crowd, presumably trying to drown out the noise so he could focus on his pre-match ritual.

The thing is, Neville wanted to speak to him and, when Wilshere didn’t respond, his coach did what every adult in the world must dream of doing – he just ripped out the headphones.