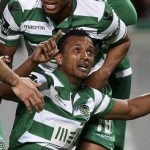 Sporting Lisbon loanee Nani broke down in tears after scoring a stunning 30-yard goal on the weekend.

The 28-year old Portugal international, who is on a season-long loan from Manchester United, rocketed an absolutely outrageous effort into the back of the net in the 68th minute to help guide Sporting to a 2-0 win over Gil Vicente on Sunday.

Nani celebrated vibrantly at the Estadio Jose Alvalade before being overcome with emotion which he suggests was simply a moment of remembrance for the life he lived prior to making it as a professional footballer.

“It was a goal like any other,” he told reporters. “I received the ball, saw the goal, shot and I was lucky.

“I thought about myself and everything that I have gone through.

“It’s personal stuff, that nobody knows about.”

The goal was Nani’s fourth in the Primeira Liga this term, taking his Sporting total to eight in all competitions. The win kept the Lisbon giants in third spot on the league table, nine points behind leaders Benfica.