Lukas Podolski’s stunning volley against Montpellier has been voted Goal of the Season by Arsenal’s fans.
The Germany international found Olivier Giroud on the edge of the box and met the Frenchman’s lofted return pass with a venomous first-time effort past the keeper.
Podolski’s strike received 40 per cent of the votes cast in our official club poll. 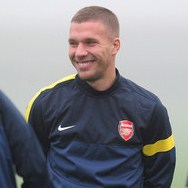 Per Mertesacker Insists Arsenal Have Answered Their Critics