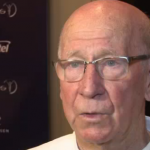 After being left out of the starting line up for Manchester United’s Champions League last 16 second leg against Real Madrid, rumours emerged of Wayne Rooney making an exit from Old Trafford.

But, speaking at the Laureus Awards in Rio de Janeiro, Manchester United director Sir Bobby Charlton backed up the words of his manager Sir Alex Ferguson – adamant that the 27-year old will continue to stay at the club.