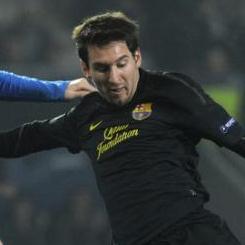 Lionel Messi hit a hat-trick as Barcelona sealed their qualification to the Champions League knockout phase with two games to spare in a comfortable 4-0 win at Viktoria Plzen.

Messi put the visitors two goals up in the first half, breaking the deadlock from the penalty spot in a decision which saw Marian Cisovsky issued a straight red card for preventing a clear goalscoring opportunity.

Though the plucky hosts continued to put up a fight, Cesc Fabregas made it three on 72 minutes before the Argentine wizard completed his second treble this week deep into added time.

Pep Guardiola’s side are now certain to be defending their Champions League trophy into the New Year after continuing their strong recent form including yet another clean sheet.