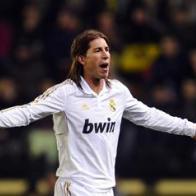 Sergio Ramos and Mesut Ozil both saw red as Real Madrid were reduced to nine men in a 1-1 draw against Villarreal at El Madrigal that could strike a crucial blow in their Liga title hopes.

Cristiano Ronaldo’s 61st minute goal looked set to open the floodgates against the home side, but instead an already bad-tempered game descended into acrimony after Marcos Senna equalised from a deflected free-kick with 10 minutes left.

By the time Ramos and Ozil were red carded, Real manager Jose Mourinho and his assistant Rui Farina had already been banished to the stands as the pressure being exerted on the league leaders by old rivals Barcelona began to show. Jose Mourinho : I Can Handle The Pressure Of Real Madrid!

Van Der Vaart : I Am Staying At Real Madrid!