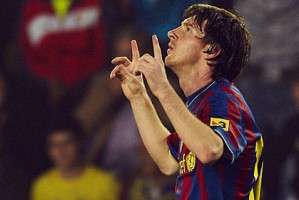 Barcelona put the disappointment of their midweek exit from the Champions League to one side with a comfortable win at Villarreal which moves them four points clear at the top of the Primera Division table.

After being sunk by Inter Milan on Wednesday night, the Catalans faced a stern challenge to their domestic ambitions against a Villarreal side that had won their past six matches at El Madrigal.

But Pep Guardiola’s side quickly extinguished the threat with three first-half goals from Lionel Messi, Xavi and Bojan Krkic to ensure a more comfortable evening than could have been expected.

Villarreal did manage to pull a goal back after the break through half-time substitute Joseba Llorente, but Barca were never stretched and Messi added his second two minutes from the end.

It was a steadying victory in Barca’s title defence and one that could be made all the more vital with the pressure now on Real Madrid to close the gap back to one point ahead of Osasuna’s trip to the Bernabeu tomorrow.