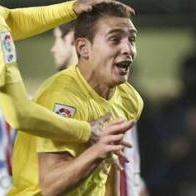 Villarreal recorded their first win in seven games and climbed out of the relegation zone with a 3-0 La Liga win at home to fellow strugglers Sporting Gijon.

Villarreal, whose campaign has been wrecked by injuries to key players, made the breakthrough in the 57th minute at their Madrigal stadium when Ruben battled through a crowd of defenders and slotted past Juan Pablo.

Valero added a second in the 59th when he found space outside the penalty area and lashed a powerful drive into the corner of the net before Soriano curled a superb shot into the top corner in the first minute of added time.

With half the season played, Villarreal are 17th on 19 points, ahead of 18th-placed Granada on goal difference after the Andalusian club were beaten 3-0 at Espanyol on Saturday.