Reports are out claiming that Villarreal coach Marcelino concedes they could be forced to sell Gabriel Paulista this month. 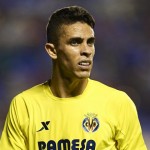 The Brazilian defender is being linked with Arsenal and Manchester United this month.

“I have not considered selling Gabriel, as it would be bad for the club from a sporting point of view. But if both Gabriel and the club believes that it would be best for all parties to sell him, I will accept it,” said Marcelino.

Gabriel confirmed the interest of Arsenal this week.

“I’m not bothered by what he said. It annoys me not, for it is up to him. He is a very noble and professional player,” added the coach.

“His mind is here and he will continue to prove his worth.”