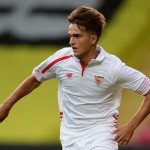 Reports are out claiming that Villarreal have snapped up Barcelona midfielder Denis Suarez.

Sevilla released Suarez from his loan so he could join the Yellow Submarine.

The player joins the coastal outfit on a straight transfer from FC Barcelona and joins Marcelino’s side on a four-year deal. Sergi Roberto Happy He Chose To Stay With Barcelona