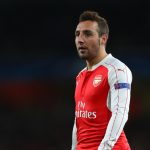 Reports are out claiming that Villarreal are keen to tempt back Arsenal midfielder Santi Cazorla.

Cazorla, who played for the La Liga club earlier in his career, hasn’t featured for the Gunners since picking up a knee injury in November.

Villarreal are currently in fourth place in the Spanish league table and are likely to be able to offer Champions League football to Cazorla next season.