It has been revealed that Villarreal have snapped up Porto striker Adrian Lopez on-loan. 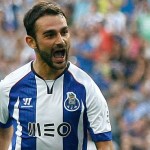 The 27-year-old, who won both the Primera Division and Europa League with Atletico, moved to Portugal last summer but failed to make a real impression for the Dragoes, scoring his solitary goal in a 6-0 Champions League victory over BATE Borisov in September.

A statement published on Villarreal’s official website confirmed an agreement had been reached for the Asturian striker to spend the 2015-16 season at El Madrigal.

The two-time Spain international linked up with his new team-mates in a training session on Monday afternoon.