Interesting transfer news are out claiming that Villarreal are moving for Real Madrid striker Alvaro Morata. 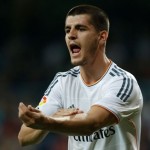 It is said that Real coach Carlo Ancelotti has this week announced that the Spanish U21 international can leave on-loan.

Marca claims that Villarreal are favourites for the striker as Real will only consider a straight loan, with no permanent option.

This demand has frightened off bigger European clubs, including Arsenal, Tottenham and Juventus.

Villarreal will compete in the Europa League next season.