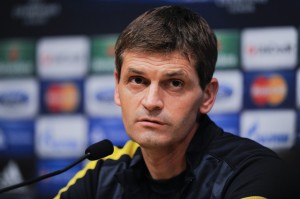 Barcelona have announced a press conference for 7:30pm where they are expected to announce Tito Vilonova’s exit from the club.

According to local reports, the Barcelona coach is to leave his position for good to battle his cancer after recent tests outlined a second relapse.

The 44-year-old Vilanova spent two months in New York earlier this year undergoing radiotherapy and chemotherapy treatment for cancer, having twice had surgery on his parotid gland in Spain over the last 18 months.

Former Girona coach Joan Francesc Ferrer Sicilia or Rubi as his most commonly known is expected to be named as Vilanova’s replacement. Rubi only joined the Barcelona staff this summer and was set to be Vilanova’s assistant.

Last season he led Girona into the Segunda Division play-offs but there they were beaten by Almeria. Most of his experience as a player and a manager has come in Tercera División and Segunda B.