Good news for all Manchester City fans as captain Vincent Kompany could be back in action in the Premier League this weekend. 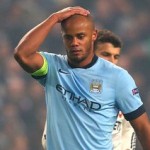 The Belgium international centre-half missed the November 8 draw with QPR after suffering a knock in the Champions League clash with CSKA Moscow in the week leading up.

The 28 year old was also unavailable for Belgium’s Euro2016 qualifier against Wales last week but has returned to City training ahead of Saturday’s home fixture with Swansea City.

However, reports suggest that City boss Manuel Pellegrini may opt to give Kompany some further time on the sidelines so he is fully fit for Tuesday’s vital Champions League meeting with Bayern Munich. Mancini : Mario Balotelli Will Be Our Lethal Weapon!