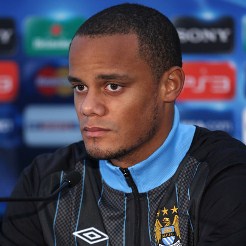 Manchester City captain Vincent Kompany does not believe the club have any need to be concerned about in-form Arsenal’s visit to the Etihad Stadium on Sunday.

By contrast, Arsenal have recovered from their own disastrous start to collect 22 points from their past 24, a surge that has taken them back towards the top four. Yet Kompany is not nervous, insisting City’s performances this term give them every right to be confident.

“Arsenal are a great team. But we can beat great teams,” said Kompany.

“On Sunday, we are looking to do what they have done.

“They have picked themselves up after a difficult month. The way they have done that is absolutely incredible. I consider them as a top team, who will make a top game of it.

“But we are a difficult team to beat at home. In the big games, even when we didn’t win, we still looked like the team that was most likely to.”

Mancini : Balotelli Has Promised To Change His Behaviour!