It has been reported that Vincent Kompany is not panicking over Chelsea’s five point lead on Manchester City. 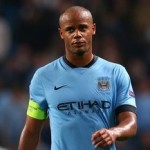 The Manchester City skipper says he is relaxed about the Londoners’ flying start because the champions have reeled in bigger deficits to win the title in 2012 and again last season.

The Belgium international said : “I can’t really say that personally I’m looking too much at Chelsea,”.

“When we won the league first time, we were nine points behind with six or seven games left to play.

“Last year Arsenal were leading by six or seven points in February and it ended up being between Liverpool and us.

“There are so many reasons why I’m not really focusing on getting back at Chelsea.”