It has been reported that Manchester City are ready to hand Vincent Kompany a new contract. 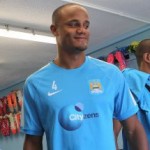 The Premier League giants are reportedly preparing to offer captain Kompany a massive new contract worth up to £65m to keep him at the club.

The Belgium international central defender will be handed a £200,000-a-week, six-year deal, according to The Sun.

If he accepts, the 28-year-old could be set to end his career at the Etihad.