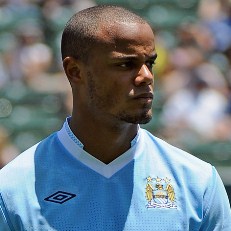 Vincent Kompany believes Manchester City have challenged the natural order of the game to make the title race a more entertaining spectacle.

The vast sums invested in the club by owner Sheikh Mansour has upset many clubs, who feel City are attempting to buy their way to success.

Kompany said: “I think Tottenham and ourselves doing well in the past few years has been great. Had it just been the same four sides challenging each season, it would have damaged the game here.

“Now there are maybe six teams capable of winning the title and that can only be great for English football.

“We finished equal-second last season so there is only one spot to go for this year – and that’s to win the title.

“It’s a big challenge – but why not? There is pressure and expectation on us but that’s what we want.

“I don’t see what we achieved last season as anything other than the beginning. The club has changed on and off the pitch since the new owners arrived.

“But our fans deserve success as much as other great clubs. There should be no credit taken away from the players – it doesn’t matter what other people think about us.”

Manchester City Set To Move In For Edin Dzeko