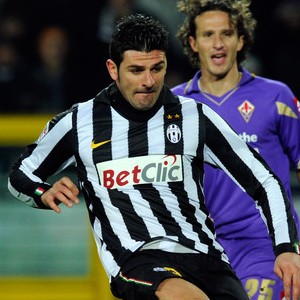 Juventus striker Vincenzo Iaquinta has declared that hte club can still win the Scudetto this season.

Juve have drawn four of their last five games in all competitions, but still lie third in Serie A, although they remain six points behind League leaders Milan.

Iaquinta told Sky Italia that : “We are sorry to be out of the Europa League,” .

“We could have gone through. We drew five times – one victory would have been enough to go through.

“I have watched the game against Poznan again. We created many chances. It’s a shame. Anyway you couldn’t play on that icy pitch full of snow. The game should have been suspended.

“But now we must think about the League. It will be a difficult game against Catania. It’s always tough there. But that’s fine. We are motivated and we are going there to get the three points.

He then said : “We are not inferior to Milan, Inter and Roma. We have improved a lot. We can work more without Europe in midweek and we can concentrate better on the League.

“We are up there and we will fight until the end.

“We create a lot. We can score more goals. But in the end we always find the net. Perhaps we should also look at conceding less. We’ll work on it.

“We are a young team. We have changed a lot. The mister is one of those people who works a lot on the tactical side of things and the defensive part of the game: we are seeing improvements in those areas.”

Mauro Camoranesi On The Verge Of Joining Birmingham City