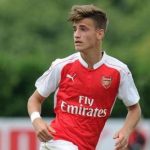 Reports are out claiming that highly-rated Arsenal youngster Vlad Dragomir has put pen to paper on his first professional contract with the North London club.

The young midfielder arrived at Arsenal from his hometown club ACS Timisoara in the summer of 2015.

The Romania youth international specialises in the number 10 role, but he can also play on either flank.

A statement on the club’s official website read: “Young midfielder Vlad Dragomir has signed his first professional contract with the club.

“Everyone at Arsenal would like to congratulate Vlad on his new contract and to wish him well with his continued development at the club.”