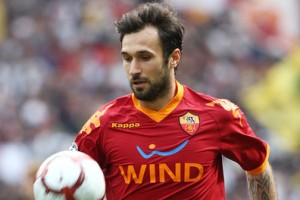 Roma striker Mirko Vucinic has declared that his club are the favourites for the Scudetto after going top of the table.

The Montenegrin international scored in the 2-1 win over Atalanta that allowed them to leapfrog Inter Milan.

Vucinic told reporters after the game that : “It’s a very beautiful thing and we hope that it will last,”

He added that : “Inter were the favourites when they were the leaders. Now we are up there.

“Our great strength is the unity of this team, which never wavered even during the difficult moments and we all made sacrifices for the squad.” Mirko Vucinic Not Interested In Playing For Tottenham FC