Reports are out claiming that Arsenal’s Theo Walcott has backed the club to move on from the Champions League defeat against Dinamo Zagreb to concentrate on Saturday’s clash with Chelsea. 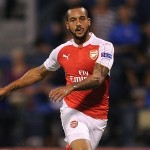 The England international star, who came off the bench to score in the second half of the 2-1 defeat, is expected to start against the Blues in the weekend’s early kick-off at Stamford Bridge and is looking for an immediate response from the North Londoners.

“We’ve had experience of playing against 10 men we actually found it quite difficult. To be honest you wouldn’t have thought that we had 10 men.

“We played extremely well in the second half, we had a lot of the ball and we had to go for it, to be bold and wise.

“It was just too late. We need to move on now. We’ve got a big, important game at the weekend but everyone will be very disappointed.”