It has been reported that Theo Walcott expects Mesut Ozil to benefit from Arsenal’s new injection of pace. 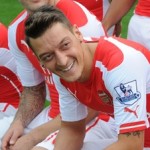 The England international is expected to return from injury soon, while the likes of Alexis Sanchez, Danny Welbeck and Alex Oxlade-Chamberlain are also known for their speed.

“When [Mesut] was at Real Madrid and he had Di Maria, Ronaldo and Benzema, three very pacy guys, the number of assists he got was absolutely key,” Walcott told Arsenal Player.

“It’s a massive season for him personally and I think the likes of us guys will help him tremendously.

“There’s a lot of pacy guys in this team now and we’re thinking that’s what we might have lacked last year, especially when I got injured – there weren’t as many players to get in behind [defences]. Defenders then double up on you, which creates space for other people.

“You have us bombing on and then you have the likes of Aaron, Jack, Mesut and Rosicky, who can all spot a pass, so that’s only going to help the team. We’ll be very dangerous on the counter-attack.

“It’s very exciting for Arsenal fans to see. I think it will maybe bring back the years where we were so successful. It’s all about pace now and that’s what you need in a team and we have bags and bags of that.”

Eboue Believes Arsenal Can Surprise Barcelona At The Nou Camp