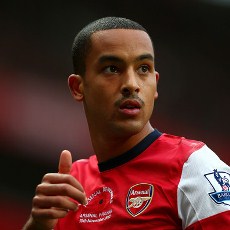 As England prepare to meet Brazil tomorrow one of the most transformed and consistent player they have in their ranks in Theo Walcott, the Arsenal man has been enjoying a rich vein of form recently and although he relishes playing in a striker role for Arsenal it’s unlikely he will do so for England.

But since then Jermain Defoe has withdrawn and Daniel Sturridge is carrying an injury that leaves just Wayne Rooney and Danny Welbeck as the two fully fit forwards.

“It has been a slow process with England, at 23, 30 caps is not bad. A lot of players at that age have just started to come into the set-up now. I have got a lot of experience. The next goal is to get into the starting line-up for England and stay fit, because when I come with England I manage to get an injury, where it is San Marino, Germany or whatever.

“It is going to be difficult. There are some great players. I think you need to get into the manager’s face in training. I want to perform as well and the manager’s going to pick his best team. When it comes to the tournament side of it there is the squad thing as well and I want to do well. I want the team to do well, but if I am in that team it makes me a better player.”

Having laid it on the line that he wanted to play as a striker, Walcott has delivered on most occasions he has played there this season – not least in the 5-2 win away at Reading in December. The emergence of Giroud has limited that in recent games but Walcott is quietly maintaining that a central role is where he sees himself.

He said: “I didn’t expect it to go as well as it did. I thought it would take a few games to get used to it. I haven’t played there for seven years. In training I have been doing it but when it comes to a match it is totally different. But when you have got the likes of Santi Cazorla and Jack Wilshere as well, it makes the job easier.

“Of course, there are nerves and a lot of pressure in any game. But when you are demanding to play in a certain role you need to perform and, thankfully, it has gone well so far.”

As for the mentality of a striker he offered this on his new approach: “I wouldn’t overthink it. You’re going to be judged on goals and assists but you’ve always got to make the right decision. If that means being greedy at times you’ve got to do it. There’s no slacking. You have to be focused.”

The contract was finally signed on 18 January but not before the most fractious time in his relationship with Arsenal, who issued him with an ultimatum at the end of August – sign a new deal or be sold – that was later retracted. Although Walcott has played some of the best football of his career since then, he admitted that the pressure of the stand-off had taken a toll.

“The last three games before it got sorted were very difficult,” he said. “At times it was putting me off my game, it might not have shown, but it definitely did. Three games before, might have been Swansea [the first FA Cup third-round tie], I had a lot of chances and I missed, scuffed quite a lot.

“Another game before that, it was too much on my mind, it was too much to bear, throughout the whole year from the summer onwards. Thankfully, I got through that and can now concentrate. I believe in the Arsenal team. That’s the main thing. This team should be right at the top. That’s one of the main reasons why I wanted to commit my future.”

He said that he had benefited from an hour-and-a-half discussion with Thierry Henry at the Arsenal training ground about the various pressures that are brought to bear on the high-profile players at the club. “It was about all sorts of stuff,” Walcott said. “Maybe one day I’ll talk about what we discussed.”