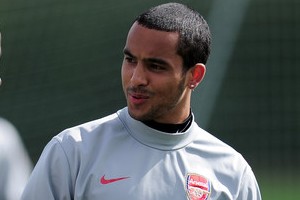 Arsenal winger Theo Walcott has sent an ominous warning to Barcelona ahead of tonight’s Champions League clash at the Nou Camp.

England international Walcott was the catalyst for Arsenal’s fight back in the first leg, coming off the bench to turn a two-goal deficit into a 2-2 draw, and he plans to produce more of the same in the return clash.

Walcott told reporters that : “As a winger you have to be on the front foot,”

“Hopefully I can get at them and produce a problem. We have got to believe that we can get a result.

“There are big players missing but we’ve got to come here and do a job. That’s all we can do.

“If we can keep it at 0-0 and get that early goal maybe it can keep the fans quiet.”