Reports are out claiming that Theo Walcott suggests Arsenal’s form will soon begin to worry their opponents. 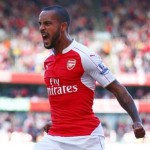 The Gunners have recovered well from their opening weekend defeat to West Ham United to now sit fourth on the Premier League table and Walcott feels they are only going to continue improving.

After scoring in Saturday’s 2-0 win over Stoke City, the England international indicated that the North Londoners will keep getting better as the season progresses and that their opposition should be worried.

“When people say we’re not playing great – we are starting to get to where we want to be,” he said.

“And when we do hit that, people will be more and more worried. It’s the sign of a good team if you’re steady going but still getting the results.

“It’s all about getting three points at this moment in time. No one is going to remember the start of the season. It’s all about how we finish.

“People may not have seen the best of us yet but we are keeping clean sheets and creating a lot of chances. We’re especially pleased with the clean sheet. We look very solid and we’re not letting many chances against us.”