Theo Walcott believes that it is vital for Arsenal to maintain a professional approach to their Champions League playoff qualifier with Fenerbahce. 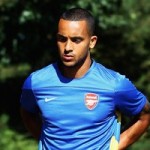 The Gunners defeated the Turkish side 3-0 in the first leg at the Sukru Saracoglu Stadium on Wednesday night and with the job only half done, Walcott has urged caution ahead of the return bout at the Emirates next week.

The England international told Sky Sports 1 : “It felt like, with the tempo of game, we dominated it in the centre of park and if we kept on going at a high intensity we’d get a goal, and we did that,”.

“It was three great goals and it’s a great result going to the Emirates now on Tuesday night.

“It’s nice and comfortable but we’ve got to be professional on Tuesday. They’re going to want to come and make it up to the fans for tonight and we have to be ready for that.”