Arsenal manager Arsene Wenger will resist the temptation to field Theo Walcott in a central role up front more often despite the forward scoring his 20th goal of the season in the defeat of relegated QPR. 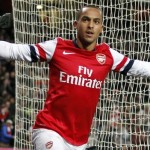 Walcott struck his 13th Premier League goal of the campaign after 20 seconds as Arsenal won 1-0 at Loftus Road to keep their quest to qualify for next season’s Champions League on course.
Wenger praised Walcott’s improved finishing and goal tally – it is the first time Walcott has hit 20 goals in a season and came on his 200th league appearance – but will continue to utilise the England international in a wide position. Lukas Podolski was the central striker at Loftus Road, but Walcott was the attacking focal point once the Germany forward was substituted.

“He finished in the middle,” Wenger said.

“I use him on the flank because I try to put a player in the middle who can score goals and having another player on the flank who can score it gives you a little bit of security.
“He (Walcott) is more mature in his finishing. His goal was similar to the one he scored against Manchester United. It’s a short back lift.