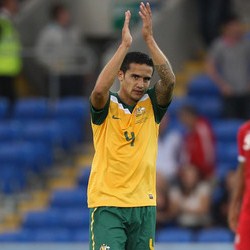 Australia overcame Wales 2-1 with smart goals by Tim Cahill and Robert Kruse in a friendly at the Cardiff City stadium on Wednesday as the hosts’ poor recent form continued.

Cahill’s volley on the stroke of halftime put the visitors ahead and a Kruse tap in on the hour gave the Socceroos a 2-0 lead over a Welsh side who have only won once since their 5-0 victory against Luxembourg in August last year.

Australia showed their attacking intent throughout the match with Luke Wilkshire striking a post 10 minutes from halftime and they hit the woodwork again moments after the restart.

The home side showed their qualities in the latter stages with Darcy Blake heading a consolation after 82 minutes and they also had a penalty appeal for handball turned down late on.

Wales, bottom of Euro 2012 qualifying Group F with no points from four games, play Montenegro on Sept. 2 and England four days later in their next matches of the campaign.