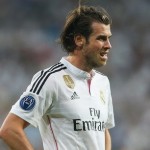 It has been reported that Wales boss Chris Coleman believes Gareth Bale is being made a scapegoat at Real Madrid.

The Welsh winger has been the subject of plenty of scrutiny this season with Spanish press in particular ripping into him time and time again for apparent sub-par performances.

But Coleman is of the belief that perhaps the 25-year old is being harshly treated for his shortcomings in the Spanish capital.

“I watch all of Gareth’s games and I can tell you as a manager you do not look at just one player,” Coleman said.

“But there is so much focus on him that if he makes one mistake it is a big deal. If he fails to find Cristiano Ronaldo with a pass and Ronaldo reacts and makes a gesture it gets blown up.

“I have watched many games where Ronaldo has been poor, Isco has been poor. They paid a lot of money for James Rodriguez and there is not a lot coming from there, but it is Gareth who is getting it.”

Didier Drogba Out of World Cup 2010 After Fracturing Elbow!