Reports are out claiming that Watford are making a move for Liverpool outcast Fabio Borini. 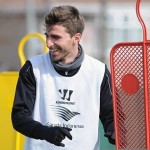 Owner Gino Pozzo is making a personal push to bring his fellow Italian to Vicarage Road on loan to bolster the attack.

However, the Liverpool outcast’s £55,000-a-week wages remain an issue and Pozzo hopes to negotiate a deal which sees Liverpool pay a third of his wages.