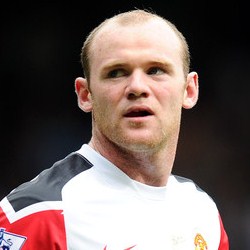 Manchester United striker Wayne Rooney led his side to an impressive win against West Ham United last night. The Red Devils were down 2-0 at half time but came back to win the match 4-2.

Wayne Rooney bagged a hattrick in the match and made his emotions clear after converting a penalty kick for his third goal of the match.

The England striker then then drops some F-Bombs for the folks watching on television. Wonder what Sir Alex has to say about his striker’s emotion outflow. Check it out.