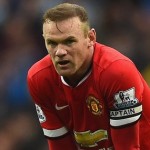 Charlton will present Rooney with his 100th cap next week.

“Wayne’s form goes up and down a bit and I don’t think the captaincy helps. He takes a lot upon himself and he doesn’t always make the right decisions.

“He’s England’s best player, our lad most likely to win matches. That’s what he should focus on. His own game.”

It is in the best interests of England, United and not least Rooney himself that Charlton reveals that opinion. He does so fully aware that the highest-paid English footballer listens to him.

“We do chat from time to time,’ says Sir Bobby of their relationship at Old Trafford, where he is a director. ‘Sometimes he comes to ask me something. Sometimes I make a suggestion,” he told the Mail on Sunday

Patrice Evra : It’s Been A Terrific Week For Manchester United