It has been reported that Wayne Rooney was full of praise for England following their 2-0 win over Switzerland on Monday night. 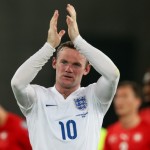 The Manchester United star skippered the Three Lions to victory in their opening Euro2016 qualifier in Basel which came courtesy of a brace from former teammate Danny Welbeck.

The Arsenal signing scored in the 58th minute and in injury-time at St-Jakob Park to give Roy Hodgson’s men a crucial win away from home which was well-received by new captain Rooney.

“The result, I thought, was the most important thing,” Rooney said.

“Obviously we wanted to play well and wanted a good performance, but I think it was vital we didn’t lose.

“We knew that and I also thought we played really well. We stuck to our game plan, we created chances, maybe could have been a couple of goals up at half-time.

“I think it is probably our best performance since (the World Cup in) Brazil at home, at Wembley, but we have to keep going, have to keep working.

“We are a young team and there were still some things out there that we could have done better and a few sloppy mistakes at times, but we’ll work on that.

“We’re a young team but we’re progressing and hopefully we can continue.”