It has been reported that Wayne Rooney is full of praise for Manchester United teammate Darren Fletcher. 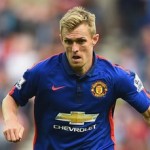 The pair will face off tonight as Rooney’s England takes on Scotland at Celtic Park.

“It’s incredible for him to be back playing and to be back in the Scotland team,” said Rooney of Fletcher, who was missing for most of the 2011-12 and the 2012-13 seasons because of ulcerative colitis.

“It shows the character he is, the type of person he is.

“Obviously it was a hard moment for Darren and his family and he’s come though that with flying colours.

“He doesn’t miss a training session. He trains really hard, so I’m really pleased he’s managed to come through. He’s back fit and ready to play.”