It has been reported that Manchester United striker Wayne Rooney has paid tribute to Chelsea fullback Ashley Cole. 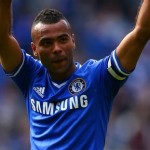 The former Arsenal defender has announced his international retirement after being overlooked for England’s World Cup squad.

“He was the best left-back in the world for 10 years. Incredible player. I know he’s disappointed that he’s not here, but he respects the decision.

“He has been a great player for us. His decision to retire is down to him and we have to respect that and respect the career he’s had,” said Rooney.