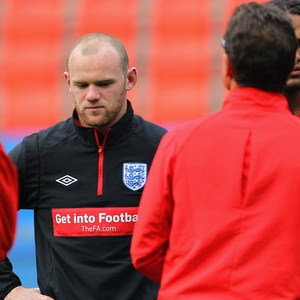 England manager Fabio Capello has confirmed that shamed striker Wayne Rooney would be leading the attack for the Three Lions in tonight’s crunch European Championship qualifier after the Manchester United striker declared that he would be able to separate his professional responsibilities from his private hell and perform as he did against Bulgaria at Wembley on Friday night.

“I’ve spoken to him. Private things. But I monitored him during the training and he was good. He’s focused on the game. I think during this period, when he is on the pitch, he forgets any problems he has.”

Capello also acknowledged that his players should behave off the field. “It’s important, yes,” he said.

“But I think it’s also important to stay with the players and to play. For the players, to play, it’s a fantastic moment. You forget everything”.

“Look, you have to separate, to divide, at different moments the private life and the job. You have to be strong to divide the two. My job is the second part. The other part is his problem. Rooney played very well on Friday”.

‘When he had the ball at his feet he was really good. He’s so technically strong and, passing the ball, he was excellent.”