It has been reported that Manchester United striker Wayne Rooney sees Holland as World Cup favourites. 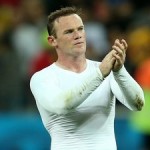 Holland coach Louis van Gaal is taking over as Manchester United manager after the World Cup and Rooney did not hesitate when asked which team he would like to win the tournament now.

He said, with a deadpan face: “Holland.”

He added: “It’s a fantastic tournament to be a part of and I’m disappointed to be going out, but I’ll watch from home – I’m a football fan.”