Reports are out claiming that Wayne Rooney is set to captain Manchester United in their Premier League opener against Swansea City. 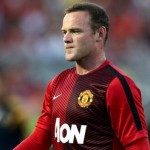 The Daily Mail reported that it is understood Rooney remains the front-runner to start the season as skipper because main captaincy rival Robin van Persie will not be match fit for the opening Barclay’s Premier League game against Swansea a week on Saturday.

The former Arsenal striker, who captained Van Gaal’s Holland team during the World Cup finals in Brazil this summer, returns to training today after a post-tournament break.

Van Gaal has doubts about handing the club captaincy to Van Persie, 30, given that he is prone to injury and may not always play. Phil Jones Set To Be A Regular At Manchester United