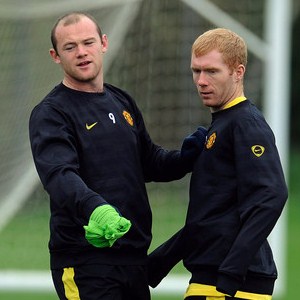 Sensational news are out and it has been reported that Manchester United striker Wayne Rooney has called for club teammate Paul Scholes to come out of international retirement.

35-year old Scholes quit the England national team in 2004 and has rejected calls to return to the team in recent years.

The former Everton striker knows it may be a hard task to get the veteran midfielder back in the Three Lions colours but admits he would love to play alongside him at international level.

Rooney said : “I’d like to see him playing. He’s fantastic, one of the best players in the country,”.

“But it’s his decision and Fabio Capello’s whether he wants to try to pick him. It’s down to them.”