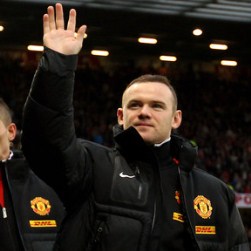 It has been revealed that Wayne Rooney has put his hand up for the England captaincy.

The Manchester United star would not reject the chance, and also believes Steven Gerrard would be a good choice to lead England into this summer’s European Championships.

The Manchester United striker, who scored two goals in Saturday’s 2-1 Barclays Premier League defeat of Liverpool, tonight tweeted: “For everyone asking i would love to be england captain. But thats upto new manager to decide. Gerrard is perfect choice for me.”